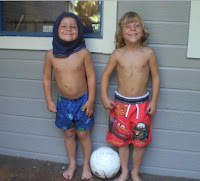 My kids have stopped wearing shirts to bed. They give up the bottoms and I'm off the hook for buying pajamas, woohoo, but I digress. I had this great idea to finally buy those boys pj pants they sell separately at Target, but of course they were only in the "way too big for my boy's little bodies" sizes. So I had a pretty brilliant idea, boxers. Those little soft knit boxers that are so darn cute. Sure not wasting money on more Hulk pajamas whey they refuse to wear the shirts.

I get home and of course Mr. "I never want to try anything new" rejects the boxers outright. I tried to sneak in the whole Hanes tagless idea, since he is a total sensitive tag-hater, but superheroes totally win out over plain but soft undies. I show them to Donovan, and he whips out a pair "Underwear!" he yelps, and starts giggling. Turns out they put 2 pairs of size small boxers, and one pair of large blue underpants, yep. I'm betting someone stuffed those in while browsing through the messy selection, and as a person who puts things pretty randomly back on shelves (which drives my husband batty but I do draw the line at perishables) I couldn't get too upset.

So here's where it gets tricky. Word of advice, if you have to return a set of boxers that came with a pair of underwear too large for your kids and too small for your husband, whatever you do don't just leave it lying on a table. As next thing you know some kid has put those undies on his head for the monthly soccer photo. Now it is lost in the sea of possessions that is our place. Fast forward 5 hours and of course he wants to wear his new boxers to bed. What the heck, I'll try to return it and explain why I only have one pair of boxers. Two nights later, still no sign of the elusive headgear, and he wants to wear his new jammies again, so as a hurried mom trying to get the kids ready for bed I let him wear the 2nd pair. 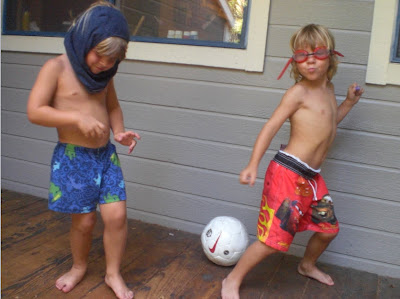 So, now, if I manage to find that underwear, which is soiled only by a quick doff on the noggin, can I plead my case? Return the whole set washed and clean? Eh, probably not work the $2 I've lost.

Email ThisBlogThis!Share to TwitterShare to FacebookShare to Pinterest
Labels: adventures with the kids